Posted on April 28, 2021 in Exercise Information 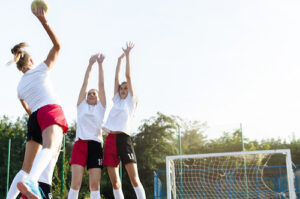 Team handball is an Olympic sport. They are exhilarating, fast-paced and high-scoring games with professional teams typically averaging 30 goals by each team in a standard match of two periods of 30 minutes. The team with the most number of balls thrown into the goal of the other team wins.

Handball tournaments are incredibly action-packed that demand utmost agility, balance, speed, grit, endurance, and strength. Since the players can only hold the ball for a maximum of three seconds and take a maximum of three steps while holding it, the majority of plays involve missile-like passes with elite players throwing at speeds up to 30 meters per second (98 ft/sec), averaging around 22 meters per second (72 ft/sec). These translate to throwing a 16 oz ball at 108 km per hour (67 miles/hour); although the top speed of 139.3 km/h (87 mph) covering a distance of 7.4 m (24 ft) has been reached by Nikola Karabatic in 2018.

Star baseball pitchers can throw a 5 oz (142g) baseball over 97 mph (156 km/h) covering a distance of 60 ft (18 m). Since handballs weigh approximately three times the weight of a baseball, clocking the speed of handball throws and normalizing against the distance covered for typical handball throws, the hurling velocities by handball players are pretty much equivalent to baseball pitchers at over 90 mph (145 km/h) throwing velocity.

In a typical match of team handball of two periods of 30 minutes, it is not unusual for players to throw at least 30 times, each throw with an average velocity of 80 km per hour (50 miles per hour). These supraphysiologic cumulative loads on the shoulder cause upwards of 30% of all players to have suffered shoulder problems.

The weak link, thus, the culprit for all non-contact shoulder injuries among handball players is a weak or sub-optimally responsive rotator cuff muscle complex.

Our contemporary knowledge of the function of the rotator cuff is that there are really two distinct functions for the rotator cuff — (1) as an aid to the shoulder large power muscles in directionally based motion — such as raising the arm or rotating the arm in one direction or another; however, the most important function of the rotator cuff is (2) co-contraction of all four rotator cuff muscles simultaneously to effectively serve as a checkrein that literally pulls the humeral head toward the glenoid bone and thus compress the shoulder bones tightly together to maintain a centered and stable shoulder joint during arm motion. The faster the arm motion, the tighter the compression is needed. A weakened or sub-optimally responsive rotator cuff under the stress of high-velocity shoulder motion would undoubtedly result in microsubluxation of the shoulder joint during motion and sets off a cascade of injury patterns ranging from tendonitis, impingement pain, ligament tears, tendon tears, and frank shoulder dislocations.

The best way to mitigate against untoward shoulder injuries is to strengthen the rotator cuff muscles. This is not just by pulling rubber bands or lifting dumbbells in one direction or another (which only train the directionally based function part of the rotator cuff), but by ShoulderSphere technique of tight and fast rotation. Tight and fast rotation obligates simultaneous activation of all four rotator cuff muscles as one functional unit in all planes of action. This fast and tight rotation using ShoulderSphere is converted to an equivalent shoulder joint compressive force. This is how to achieve, train, and strengthen the rotator cuff co-contraction to prevent shoulder injuries in throwing athletes.

The accompanying video demonstrates one of the best training methods— the unstable platform trains core balance. Single leg stance trains agility and strength. One can even do one-legged squats to further strengthen the coordination strength. The most effective and efficient rotator cuff strengthening is via action-specific movements. Such as mimicking the throwing motion.

It is also desirable to step up the intensity during throw simulation by keeping the power tracker LED light continuously in red for at least two throws. The red light indicator reflects sufficient rotator cuff power of covering a 145 km per hour baseball throw or a 48 km per hour handball throw.

It is advisable not to train more than 2-3 times per week during the “off-season” to avoid overuse shoulder pain. During playing “in-season”, the player only needs to train/maintain once a week at “1/3” volume (ie 20 throw simulations for adults, 10 for youngsters) to avoid overuse.